Theoretical models develop over time.  The early versions of the model lay the foundation and the broad strokes on the canvas.  As the understanding deepens, the models will converge with empirical results leading to finer and finer strokes, revealing a complete work.

This is the case with electric polarization on dielectrics, beginning with Maxwell and Mossotti in the 1850’s, to Debye’s 1929 ground breaking work on polar molecules, and finally, to Onsager and Kirkwood on polar liquids.  Drude, Debye, and Cole’s work on anomalous dispersion and dielectric loss continued the model for dielectrics in a frequency-dependent alternating electric field.  Each contribution advances our microscopic understanding of an electric field with polar molecules, and their local solvent environments.

An external electric field applied to a nonconductive dielectric solid, liquid, solution, or gas will invoke a complex impedance or capacitance.  The capacitance of a material is its ability to store charge as imposed by the applied electric field.  The bulk material will respond with a polarization given by Maxwell’s equation

or, the bulk polarization, P, is the average of all dipole moments, pi, within a unit volume, V.

The latter equations clarify that the macroscopic electrical measurement, through D, of the bulk sample is directly related to the microscopic, and later proved molecular, response of either induced or permanent electric dipoles, pi.  This treatment will therefore, attempt to bridge the gap between the directly-observed macroscopic response with a microscopic molecular characteristic and physical understanding.

Additionally, this study will focus on peptides and proteins in solution, therefore the following treatment assumes the sample to be linear, isotropic, and homogeneous in response to the applied electric field.  An aqueous solution or liquid sample would inherently posses an isotropic and homogenous response.  A linear response for such samples would additionally require that the applied electric field, E, be sufficiently small so as to not induce further perturbations, and thus nonlinear terms, into the polarization.

and the electric field at the center of the single molecule, or

To further the treatment, it is customary [Barger, 1987 #107] to parameterize the induced dipole moment, or the dipole moment induced by the applied electric field, as

on the molecular scale, is known as the total polarizability and is an empirical parameter or proportionality constant.  The bulk material scale, the average dipole moment per unit volume would follow as

where nv is the number of molecules per unit volume.  Substituting the latter with Eq. T07 into Eq. T03 gives

Macroscopic dielectric materials exhibit the observable parameters: the dielectric constant, the relative permittivity, and the electric susceptibility.  These are related to the bulk polarization and the applied electric field as follows

where the dielectric constant, k = e/e = C/C0 = , also known as the relative permittivity, and is the electric susceptibility.  Equating Eq. T10 with Eq. T11 and simplifying gives

which is first developed by Mossotti [Mossotti, 1850 #177] in 1850 and independently by Clausius [Clausius, 1879 #178] in 1879 and is called the Clausius-Mossotti equation.  This equation reveals the macroscopic dielectric constant, , in terms of the microscopic parameter and molecular polarizability, .  Its more traditional form is [Shoemaker, 1989 #101]

where M and is the molecular weight and density of the pure sample, respectively, and NA is Avagadro’s number.  The latter is the simple substitution of nv=NA /M into Eq. T12.

The treatment of Pd and is inherent to the derivation of the Clausius-Mossotti equation.  However, to quantify the orientational polarizability, am, and thus follows P , begins with the potential energy, U , of the permanent dipole moment, , in the applied electric field, E, or

for a single dipole moment.

Coherence is the state of alignment of the permanent dipole moment with the applied electric field.  This is expressed in the latter equation, Eq. T16.  A perfectly coherent dipole will possess the greatest coupling to the applied field and exhibit the greatest polarization.  Clearly the average bulk polarization is temperature dependent because collisions or vibrations of neighboring molecules will tend to disrupt a coherent dipole.    [Schwartz, 1972 #109]  Therefore, the additional treatment of the permanent dipole moment into the Clausius-Mossotti equation must allow for the inclusion of statistical mechanics.

The average dipole moments throughout the bulk liquid or solution is applied to the Boltzmann distribution via [Atkins, 1978 #110]

where L(x) is the Langevin function given by

where x = E/kT, k is the Boltzmann constant, and T is the temperature.  The Langevin function expands in a taylor series as

in which it can be seen that the first term is the only major contributing term and thus the average molecular dipole moment, from Eq. T17, is then

which follows the polarization as

Direct application of the latter equation yields direct measurement of Pm, via , M, and ,  plotted against 1/T has the form of a straight line.  The y-intercept of the line leads to the induced polarization, , and the slope to the permanent dipole moment, .

The latter direct application works excellent for gases, however, the temperature range of liquids and solutions will not be as great, therefore, a second method exists to subtract the induced polarizability, , from the total polarizability via the refractive index, n, where

known as the Lorentz-Lorenz equation and Rm is the molar refraction.  Determination of Pd, at high visible frequencies, can be performed with a Abbe’s Refractometer.  Pm is then determined for low frequencies which includes P , in which P is then found by Pm – Pd.  The permanent dipole moment, , then follows from P

In summary, the macroscopic dielectric response to an applied electric field is based on the microscopic induced polarizable atoms and the permanent dipole moments of molecules.  The induced responses represent atomic and nonpolar molecular polarizability and occurs at low and high frequencies of the applied field.  The permanent dipole responses represent only polar molecules in which the molecules become rotationally oriented with low frequency electric fields.

The above treatment provides a basis in which the observed bulk response to an applied electric field relates to its underlying molecular polarizabilities and permanent dipole moments.  The above treatment assumes that the applied electric field is static or at extremely low frequencies, thus negating any temporal mechanisms.  This section will provide the basis for the dynamics and time responses of the dipoles in pulsed and time-varying electric fields.  This treatment will directly lead to the nature of dielectric spectroscopy.

Normal dispersion is characterized as frequency responses in which the dielectric constant increases with increasing frequency.  This is typical of non-interactive gases and higher optical frequency regions, i.e. the refractive index, for polar and nonpolar liquids where induced polarizability is in effect.  Normal dispersion is attributed to resonance effects as described by quantum mechanics or classically via the forced harmonic or mechanical oscillator as set forth by Cauchy in the 1830’s [Prock, 1962 #255].

Anomalous dispersion was first observed by Drude [Drude, 1897 #256] in1897, in which the dielectric constant was measured against the frequency of a standing wave with liquid immersed wires.  Anomalous dispersion is characterized as those frequency responses in which the dielectric constant decreases with increasing frequency.  This is typical of the microwave, radio, and sub-radio frequency regions for polar liquids where orientational polarizability is in effect.

Takashima [Takashima, 1989 #224] provides the most direct treatment of empirical observables via modern techniques and their fundamental properties.  Eq. T15 shows the total polarizability is the sum of the induced and orientational polarizabilities where the total and induced polarizabilities are given by Eq. T11, or

If an electric field in the shape of a long square pulse is introduced into a sample, the induced polarizabilities, electronic and atomic, will instantly respond to the field.  The orientational polarizability will, however, require time to accumulate coherent dipoles with the imposed electric field.  This time is characterized by a first-order differential as given by

where is the relaxation time and 1/ is the rate constant.

Debye [Debye, 1939 #183] describes anomalous dispersion to a classical relaxation process in which the demarcation between the high and low dielectric transition occurs at an angular frequency, tr, of the imposed electric field by the equation

where is the time of the relaxation of the liquid, or more appropriately, is the time required for any coherent dipoles to return to a random rotational orientation after the applied electric field is removed.

Assuming the initial value of P (t) is zero, the solution of Eq. T26 is

for the coherent dipoles to exponentially decrease back to a random orientation upon a decrease or removal of the electric field.

where is the angular frequency given by = 2 f, where f is the frequency, and E0 is the maximum amplitude of the electric field.  In like manner the electric displacement can be defined as

therefore the “dielectric constant” or the “relative permittivity” usually means the real part x and y is often known as the dielectric loss.  The dielectric loss is absorption of the energy from the applied electric field and dissipation of that energy into the surrounding solvent, usually by thermal mechanisms.

Using the above and Eq. T25 yields the complex orientational polarizability as

Substituting Eq. T30 into the latter Eq. T34 and that into Eq. T26 and then solving the differential equation yields

where the first term is a transient term and will diminish to zero for a steady state solution, therefore it is ignored.  The complex orientational polarizability will be the sum of two terms or

Substituting the latter polarization into Eq. T01 will yield the electric displacement

which is known as the Debye-Drude dispersion relation [Debye, 1939 #183].  The second line separates the real and imaginary components of the complex permittivity by taking the complex conjugate of the first line where finally by using Eq. T33 the separated components are 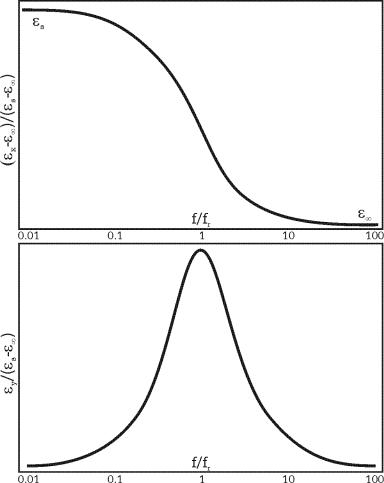 The top plot is that of the real permittivity, or the “dielectric constant”, and the bottom plot of the imaginary component of the permittivity.  The real and imaginary permittivity are simultaneously measured by modern detectors, such as a vector voltmeter, phase-locked-loop, lock-in amplifier, or phase discriminator.

Debye [Debye, 1939 #183] considered the dielectric loss, the imaginary component of the permittivity, as a frictional loss of the molecular permanent dipoles with the surrounding solvent molecules.  The solution of Debye’s treatment can simply be expressed as

where a is the radius of a perfectly spherical molecular dipole, is the viscosity of the solution, k is Boltzmann’s constant, and T is the temperature.  Therefore, the rotary diffusion of the dipole, which is characterized by the intrinsic relaxation time intrinsic, is strongly affected by its environment.  This environment is based on the viscosity and temperature of the solution, and the molecular volume of the dipole itself.  The molecular surface area, obviously, is a direct relationship of its radius, a, and thus its volume, a3, therefore, larger molecules maintain a higher intrinsic relaxation time due to greater friction, and thus viscosity, with its solvent.

The intrinsic relaxation intrinsic is not the same as in Eq. T39, for does not allow for the viscosity of the medium.  It has been proven, however, that the two are related via